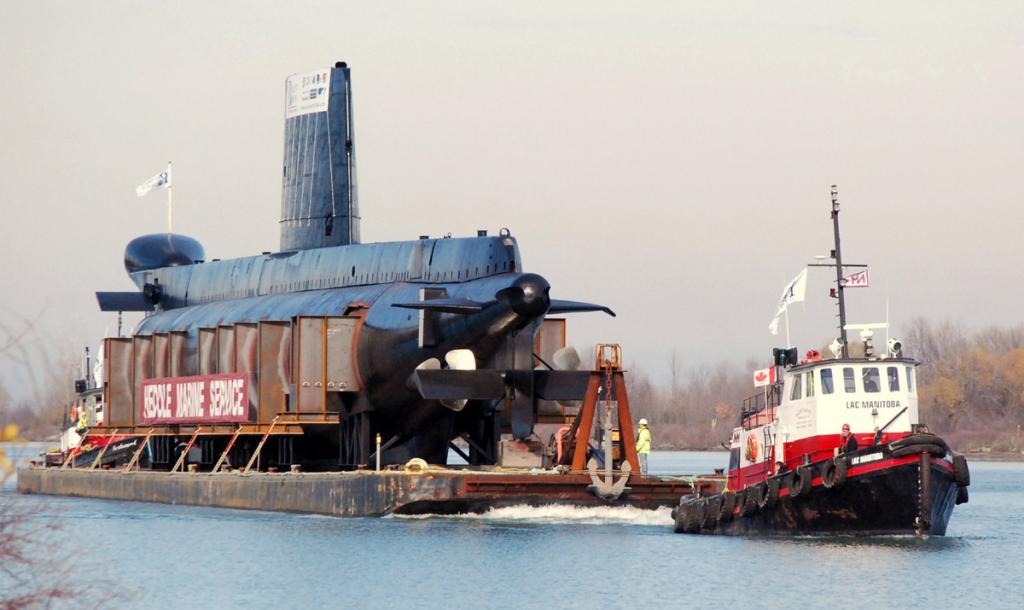 HMCS Ojibwa — the country’s last Oberon-class submarine during that period — will leave from Hamilton Harbour next mid-week. From there, she’ll make her way to a new destination at the Elgin Military Museum of NavalHistory on Lake Erie. “It’s one of a kind in that it’s such a great story, a piece of Canadian history we’re proud to be part of it,” said Kathy McKeil, director of corporate communications for McKeil Marine Ltd., involved in arranging the sub’s transportation. “She will be towed with two of our tugs, small but mighty,” said McKeil. “And we now have the sub sitting now on that barge it will be towed on.” McKeil said a plan to set sail Thursday was delayed by the engineering team until next week, for weather and technical reasons. It’ll be the final chapter of a re-purposing of the decommissioned vessel Elgin Military calls “Project Ojibwa.” In May 2012, the Elgin Military Museum took possession of Ojibwa from the Royal Canadian Navy.

It’s one of a kind in that it’s such a great story, a piece of Canadian history we’re proud to be part of it.

The football-field log sub was secured onto a floating drydock and transported through the St. Lawrence Seaway to a ship-yard in Hamilton.  Heddle Marine Service Inc. gave the Ojibwa a facelift that included temporary transportation stands and permanent exhibition cradles. Heddle, along with with Hamilton-based tug and barge company McKeil Marine and Nadro Marine Services, are readying the sub for her final trip. When it finally leaves, the 89.9-metre long, five-storey-high vessel will be towed to Port Colborne. That trip through the canal will take 10-12 hours. Upon her arrival after the final leg to Port Burwell between Nov. 19-21, a complex transfer procedure positions the 1,260-tonne sub onto a permanent mount at the Elgin Military Museum. That museum is moving from St. Thomas to its new site in Port Burwell. It is expected to open in spring 2013 and to include a visitor and education centre.

From Project Ojibwa: HMCS Ojibwa first entered service during the height of the Cold War in 1965, and was the first sub to be built to Royal Canadian Navy specifications. For 34 years, she protected our shores from Soviet submarines and was involved in many covert espionage activities. Decommissioned in 1998, HMCS Ojibwa narrowly avoided being sold for scrap metal when she was saved from the wrecker’s ball in 2010, and donated to the Elgin Military Museum.