The Latest From McKeil Marine 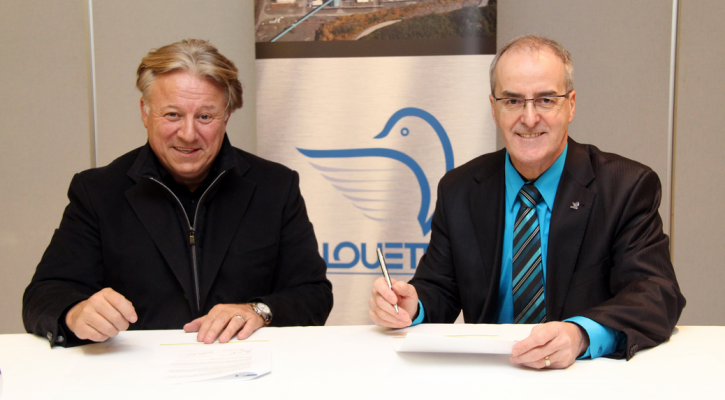 More than eight years after embarking on their sustainable adventure together, Aluminerie Alouette and McKeil Marine are renewing their partnership agreement on the use of barges. André Martel, Alouette President and CEO, and Blair McKeil, Chairman of the board and CEO of McKeil Marine, have both reiterated their commitment for the 2013-2016 period.

Since 2004, when the Alouette Spirit made its maiden voyage, more than 1,500,000 tonnes of aluminum in the form of lingots and sows have been shipped to different destinations, including the Great Lakes. This volume of metal means that 50,000 truckloads have been avoided and that congestion has been reduced on Highway 138. Also, close to 200,000 tonnes of greenhouse gas emissions have been eliminated. According to Mr. Martel, the current partnership will reduce greenhouse gas emissions by 100,000 tonnes. “Renewing our partnership with a ship-owner such as McKeil Marine and using the Blue Highway underlines our strong commitment to sustainable development,” said Mr. Martel.

Much more than a simple service agreement, the key partnership between Aluminerie Alouette and McKeil Marine also brings other significant benefits to the community. In 2012, when Alouette renewed its support for the Maison Alouette, McKeil Marine also increased its own contribution, which now equals a donation of $20,000 over three years. During the same year, McKeil Marine donated $7,000 to Élyme des sables. “We strongly believe that it’s our duty to give back to the community, and we are proud to continue doing so,” says Mr. McKeil.

Established in 1992, Aluminerie Alouette is an independent aluminum producer. With 1,000 employees and an annual production capacity of 600,000 tonnes, Alouette is the leadingemployer in Sept-Îles and the largest aluminum smelter in the Americas. The state-of-the-art Sept-Îles facility is a world reference in terms of energy efficiency andmeets government environmental standards.

Family owned since 1956, McKeil Marine is proud of its tradition of more than half a century of service in the maritime sector on the Great Lakes and St. Lawrence Seaway. With a head office in Burlington, Ontario, and an office in Montreal, Quebec, McKeil Marine’s experienced, professional team is always available to meet its customers’ needs. The company’s extensive fleet of tugs and barges allows it to handle almost all types of cargo and ensure their transportation to any destination.